Photos taken on Waverley on the upper reaches of the Clyde in August 2012 – click on an image for larger size.

The Clydebank Titan was the second of the six Giant Cantilever Cranes to be erected on Clydeside, being built at the John Brown Shipyard in Clydebank in 1906-07 by the Glasgow structural engineering firm of Sir William Arrol & Co. It was used for lifting engines, boilers, armour plating and ordnance aboard the battle cruisers and other large ships built at the yard. Following a phase as an offshore installation construction facility the yard closed in the 1990s. The fitting out Basin and the Titan are the only remaining parts of the shipyard. The Titan is a Grade A listed structure and opened as a heritage visitor attraction after a £3.75m restoration and conversion.

At nightime the Titan illuminations change colour every few seconds.

The main visible change to the Titan for its new role was the addition of electric powered lifts.

The Rothesay Dock in Clydebank was opened by HRH The Duke of Rothesay (later King George V) in 1907.

For much of its history Rothesay Dockwas utilised for mineral and coal shipments but now it is used as a large petroleum products distribution centre, the fuel being imported by sea from the oil refineries.

Over the last few years six new Type 45 (Daring-class) destroyers have been built for the Royal Navy at BAE Systems Maritime’s Clyde shipyards at Scotstoun (well known in the past as Yarrow’s) and Govan (ex Fairfield’s). The first-of-class, HMS Daring, was assembled in Scotstoun but the remaining five ships were assembled at Govan. All six were fitted out at the Elderslie Dockyard (originally John Shearer & Co shiprepairing facility) which is adjacent to the Yarrow yard.

The view above shows the final Type 45, HMS Duncan, named after Admiral Adam Duncan, the 1st Viscount of Camperdown and Baron of Lundie, a native of Dundee who defeated the Dutch Fleet at the Battle of Camperdown, just to the north of Haarlem, in 1897.

Below, Waverley sailing up the Clyde at dusk, the tall buildings on the right were originally built by Coventry Ordnance Works to supply naval ordnance to the Clydeshipyards. Later it became Harland & Wolff’s Scotstoun Engine Works, building large marine diesel engines using castings from the firm’s huge Clyde Foundry in Govan. Nowadays the building is utilised by the commercial vehicle axle and transmission manufacturer, Albion Automotive, the remaining part of the once huge commercial vehicle builder Albion Motors which occupied a site directly across the road in South Street, Scotstoun.

The only commercial dock area still operating within the boundaries of the City of Glasgoware the Shieldhall Quay / King George V Dock in Shieldhall and, across the river at Diesel Wharf in Whiteinch. At Shieldhall the main trades are  the exporting of scrap metals and the importing of animal feedstocks and bulk materials such as rock salt. The is also some shipments of engineering products including the increasingly ubiquitous wind turbines. These two pictures show the bulk carrier CSL Thames which was discharging its cargo via her own long boom discharge conveyor.

Directly across the river from Shieldhall Quay is Diesel Wharf in Whiteinch which is now associated with scrap metal exports, a trade that is also carried on at Shieldhall Quay and the fitting out basin of the former West Renfrewshipyard of Lobnitz & Co. The building adjacent to Diesel Wharf was built as the North British Engine Works by the well established Clydeshipbuilder Barclay, Curle & Company for the construction of marine versions of Dr Rudolf Diesel’s internal combustion engine. These works produced some of the first marine diesel engines in the World.

The roof of the building at the south, riverside, end could slide open to allow the adjacent Arrol-built Titan crane to lift completed engines out of the building before slewing round and lowering them into the machinery space of new ships at Diesel Wharf. Sometimes two ships were berthed side by side at the Wharf and the Titan had enough ‘reach’ to lift the machinery into the outermost vessel. Unlike the Clydebank Titan, which had been constructed in Arrol’s main manufacturing plant, the Dalmarnock Ironworks in Dunn Street, the Whiteinch Titan was constructed at their Parkhead Crane Works in Rigby Street, which they had taken over from the short lived, rival the Glasgow Electric Hoist & Crane Company. In the later years of its existence as a marine supplier site, under the state-owned British Shipbuilders, these Works were used for the manufacture of Harpoon missile launchers. Until recently the Titan was used as a ‘target’ for the adjustment of the hihly sophisticated products of the Thales Optronics factory, which is built on the site of Alexander Stephens & Sons Linthouse shipyard. This firm was better known locally by its former name, Barr & Stroud of Anniesland, which was founded by Dr Archibald Barr, Professor of Civil Engineering & Mechanics at the University of Glasgow. Barr had succeeded Professor James Thomson, (whose brother was Professor William Thomson, Lord Kelvin, the Professor of Natural Philosophy), who had succeeded the eminent Professor W J McQuorn Rankine, writer of the first definitive textbooks on the design and operation of steam engines. All of these notable gentlemen contribued to the significant global influence of industrial Clydeside at its peak.

Below, passing the fitting out basin of the Fairfield shipyard at Govan. This yard was built as a state-of-the-art shipbuilding facility by the influential engineer and shipbuilder John Elder in the 1860s. Originally named Randolff & Elder, the firm was renamed John Elder & Co after Mr Elder’s untimely death at the age of only 41 years during a business trip to London in the summer of 1869.

The firm was run by Mr Elder’s wife Mrs Isabella Elder for some time. In his memory she bequeathed fund to establish the Elder Chair of Naval Architecture at the University og Glasgow. It was the first such academic faculty in the world and, as it still exists, it is the oldest  Chair of Naval Architecture. From the mid 1880s until 1964 the firm’s title was the Fairfield Shipbuilding & Engineering Company (the yard was built on the site of the former Fairfieldfarm). After a period under the stewardship of Charles Pearce the yard was owned succesively by the Northumberland shipbuilding group and later the Lithgow Group of Port Glasgow, which, at that time, was the largest privately owned shipbuilding concern in the world. After the Fairfields liquidation the yard became part of Upper Clyde Shipbuilders, then Govan Shipbuilders before being sold to Kvaerner Industries of Norway who invested significantly, creating the massive 3-bay Ship Module Hall to carry out the construction of large cryogenic gas carriers. The SMH is now being used to create the larger modules of the two new Royal Navy aircraft carriers HMS Queen Elizabeth and HMS Prince of Wales.

The module that can be seen sticking out of the SMH Bay 3 door is Lower Block 04 of the first aircraft carrier, HMS Queen Elizabeth. At over 11,000 tonnes, the load out weight of this module is almost double launch weight of the recently built Type 45 destroyers.

The Fairfied yard has built well over 800 ships since it first opened in 1866. It has built everything from ocean liners, including fast Transatlantic ‘Blue Riband’ winners, paddle steamers, cargo vessels of all types; fuel, LNG and chemical products tankers, battleships, frigates and destroyers (and many more).

View astern to the Govan Shipyard.

There follows a selection of pictures on the huge residential property developments associated with the regeneration of Glasgow Harbour. It has been built on the site preiously occupied by the enormous Meadowside Granary, which hand been constructed in three phases. At its peak, the Granary was the largest brick-built building in Europe.

Waverley approaches the new £74m Riverside Transport Museum, opened in 2011, and the tall-ship Glenlee, built at the Anderson Roger shipyard in  Port Glasgow in 1896. Glenlee made  four circumnavigations of the World during her seafaring day. She is one of only 6 remaining Clyde-built sailing ships.

Tallship Glenlee and the new Riverside Museum, the Museum occupies the site of the former Pointhouse shipyard of A & J Inglis, where Waverley was built in 1946-47.

More details of the Glenlee can be found on the Clydebuilt Ship Database here.

Waverley approaching her base at No 81 Plantation Quay, adjacent to the Glasgow Science Centre on the south bank of the Clyde. Ahead of her is the BBC Scotland HQ, the Clyde Arc (or Squinty) Bridge and the last giant cantilever crane to be built on Clydeside, at Stobcross Quay.

Silence is golden when the happy hoardes have departed. 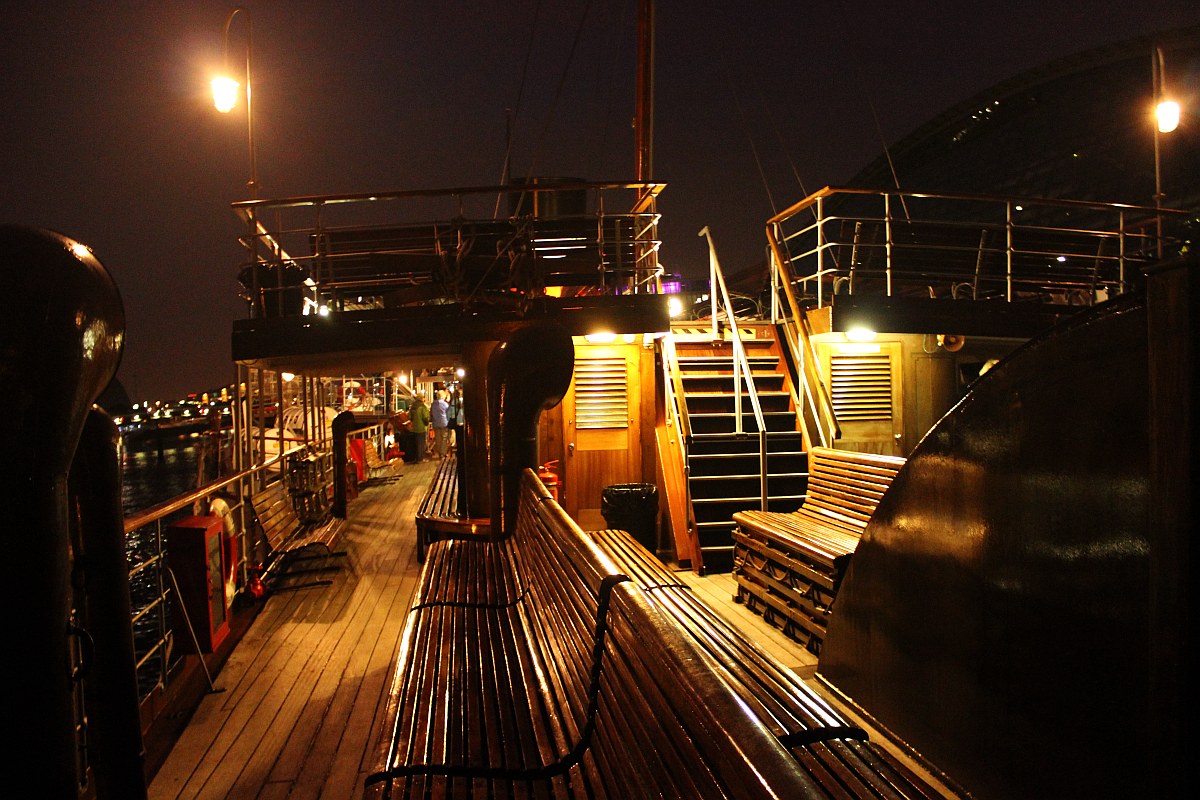 Waverley’s neighbours – the Crowne Plaza Hotel, which occupies the site of her Clyde base, No 52 Stobcross Quay, from 1977 to 1981.

Waverley neighbours – the Headquarters and studios of BBC Scotland, which relocated here from its former base at the leafy Queen Margaret Drive in Glasgow’s West End.

A memorable impression of the last remaining sea-going paddle steamer in the world at the end of a busy day.

The Mighty Paddler at rest.

This collection of pictures is dedicated to the memory of the late Dr Joe McKendrick. Thanks Joe, your efforts enriched our lives and created memories that will remain with us forever.

I hope that you enjoyed the night time views of the paddler on her native waters of the River Clyde.